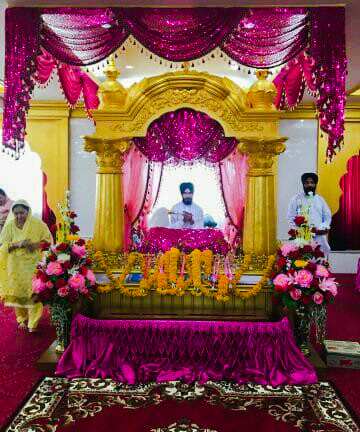 The first Sikh person to travel to Chiang Mai was Mr. Ishar Singh, who traveled from India through Burma into Thailand in the year 1905 A.D. (or the year 2448 according to the Buddhist Calendar). Shortly after that about four more families came to Thailand. They were Mr. Rattan Sing, Mr. Gian Singh, Mr. Wariaam Singh and Mr. Amanda Singh. In the year 1907 A.D. this group of Sikh people decided to setup a Gurdwara at 134 Charoenrat Road, Chiang Mai, which stands till date at the location and now occupies a space of about 240 square meters. In the year 1908 A.D., about two year later, the number of Sikh in Chiang Mai had increased tremendously, making the current space in the Gurdwara seem small. Therefore, the Sikhs together helped each other in renovating and expanding the Gurdwara. The renovated Gurdwara now had two floors, with the ground floor being empty and made of concrete, and the top story was made of wooden floor. During that time Mr. Visava Singh was made responsible to look after the Gurdwara. It is said that for the construction of this Gurdwara, high quality wood was purchased from Doi Saket, in Chiang Mai, at the price of 4 Rupees per plant Later in the year 1975 A.D. (or the year 2518 in the Buddhist Calendar), the Sikh community joined hands and together helped in maintaining and renovating the Gurdwara again. This time the Gurdwara (as in the picture) was now a concrete building and is still stands today at the same location. courtesy: Thai Sikh .org