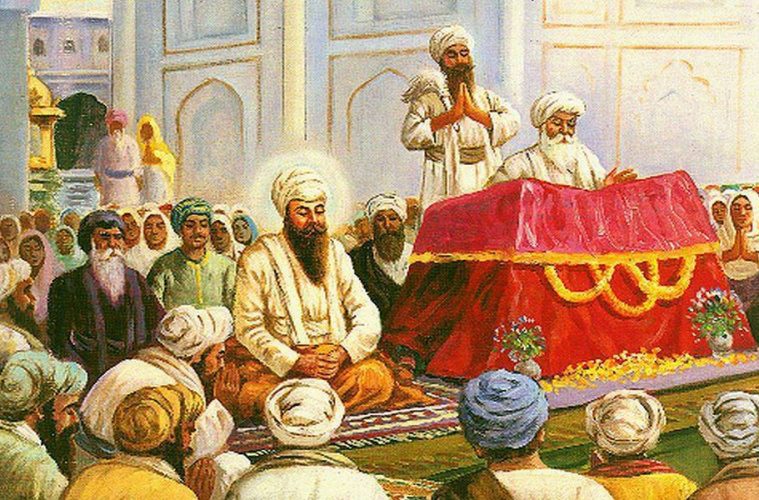 Guru Granth Sahib or Adi Sri Granth Sahib Ji (Punjabi ਗੁਰੂ ਗ੍ਰੰਥ ਸਾਹਿਬ; also called the Adi Granth or Adi Guru Darbar) is more than just a scripture of the Sikhs, for the Sikhs regard and respect the Granth (holy book) as their living Guru. The revealed holy text spans 1430 pages and contains the actual words spoken by the founders of the Sikh religion (the Ten Gurus of Sikhism).

Guru Granth Sahib was bestowed the Guruship by the last of the human form Sikh Masters, Guru Gobind Singh Ji in 1708. Before passing away, Guru Gobind Singh Ji decreed that the Sikhs were to regard the Granth Sahib as their next and everlasting Guru. Guru Ji said – “Sab Sikhan ko hokam hai Guru Manyo Granth” meaning “All Sikhs are commanded to take the Granth as Guru”. So today, if asked, the Sikhs will tell you that they have a total of 11 Gurus. (10 Gurus in human form, and the eternal shabad Guru, the Guru Granth Sahib).

Unique amongst the world’s major religious scriptures, while compiling the Guru Granth Sahib, the Sikh Gurus incorporated not only their own writings, but also included the writings of other contemporary saints from Hinduism and Islam (including saints belonging to the lowest strata of untouchables in the Hindu Caste System), who believed in the unity of God and denounced superstition and caste. Further, the composition and compilation of the Guru Granth Sahib was performed by the Sikh Gurus themselves, rather than being performed by their adherents and followers, an aspect that has been highlighted by historian-scholars while discussing the authenticity of the preachings of the different teachers and prophets of the world, as known to mankind today.

When one visits a Gurdwara (a Sikh temple), the Guru Granth Sahib forms the main part of the Darbar Sahib or Main Hall. The holy book is placed on a dominant platform and covered in a very beautiful and attractively coloured fine cloth. The platform is always covered by a canopy, which is also decorated in expensive and very attractive coloured materials. The text in which the Granth is written is a script called Gurmukhi (literally “From the Guru’s mouth”), which is considered a modern development of the ancient language called Sanskrit.

Today is the Jyoti Jyot Diwas of Sri Guru Nanak Dev Ji Maharaj who bestowed the Guruship to Sri Guru Angad Dev Ji in 1539 before departing for their heavenly abode. ... See MoreSee Less