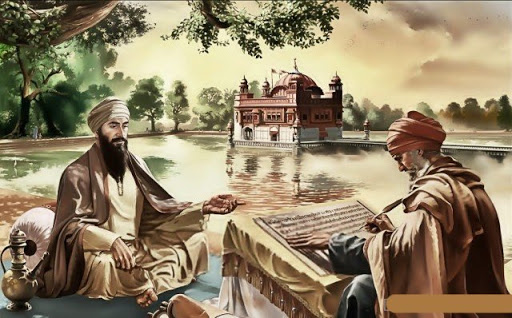 Bhai Gurdas is the first interpreter of Gurbani. His writings are considered key to understanding the Sikh holy scriptures. He wrote 40 vars (ballads) and 556 kabits (both forms of Punjabi poetry). These writings are considered the best specimens of Sikh literature and philosophy. He also had the opportunity to be the scribe of Guru Granth Sahib or Adi Granth, the holiest Sikh scripture that was compiled by Guru Arjan Dev Ji, the fifth Sikh Guru, in 1604.

The exact date of birth of Bhai Gurdas is not known but it is somewhere between 1543-1553 A.D.

Bhai Gurdas came back to Punjab after Guru Ram Das left for heavenly abode. He had the opportunity to study and observe Sikhism closely in the company of Guru Arjan Dev Ji. Bhai Gurdas also played a key role in the construction of the Harimandir Sahib (Golden Temple Amritsar).

This was a very difficult time for the fifth Guru as his own brother Pirthi Chand was very jealous of him. At the same time the Muslim ruler Jahangir had become jealous of growing popularity of Sikhism and Guru Arjan Dev Ji. He wanted to put an end to it. This was a period of great challenges and difficulties for the Sikhs. Bhai Gurdas was the first custodian of the Akal Bunga (Akal Takhat Sahib). Baba Buddha Ji was the first Granthi of the Harimandir Sahib. During the time of Guru Har Gobind Sahib, Bhai Gurdas went to many far away places like Kabul, Kanshi, Banaras, to spread the message of the Guru. The Sikh congregation was so impressed by Bhai Gurdas they that erected a Gurdwara in his memory in Kabul.

Bhai Gurdas passed away some time between 1629 and 1637 AD at Goindwal. Guru Har Gobind Sahib personally cremated his body. Bhai Gurdas had the good fortune to have had the the company of four Gurus.

The compilation of Guru Granth Sahib was completed in 1601. It took almost 11 years to complete this task. Bhai Gurdas not only wrote the Adi Granth as dictated by Guru Arjan Dev, he also supervised the writings of four other scribes, namely Bhai Haria, Bhai Sant Das, Bhai Sukha and Bhai Manasa Ram who were writing various Sikh scriptures.

Bhai Gurdas was not only an interpreter of Sikh scriptures and preacher of Sikhism, he was a walking encyclopaedia of Sikhism.

Bhai Gurdas was a great scholar of Persian and Sankrit and of comparative religion. He was a poet of superb beauty. His most famous compositions are Vars, (Punjabi ballads, 40 in number).

Bhai Gurdas as a Sikh Historian

Bhai Gurdas has documented the Sikh history in his writings and has solved some of the historical riddles about Guru Nanak Dev’s visit to Mecca, Medina, and other parts of the world:

Then Baba (Guru Nanak Dev Ji) went to Baghdad and camped outside the city. In addition to Baba Nanak, who was a Divine personality, Mardana, the musician also went along.

Guru Arjan Dev was martyred as per orders of emperor Jahangir on May 30, 1606. Jahangir wrote in his Tuzak-i-Jahangiri only 20 days after the martyrdom of Guru Arjan Dev that he ordered his execution.

Bhai Gurdas had documented the martyrdom of Guru Arjan Dev as follows:

To achieve martyrdom, Guru Arjan Dev ji immersed in the God-like ocean like a fish. The Guru merged into the heavenly light like the moth that immolates itself after seeing the light.
.. I sacrifice my life to Guru Arjan.

adapted from an article by Tarlochan Singh

Salutation to the Guru who blessed us with the mantra of of the True Name and emancipated us, ferrying us across the Sea of material existence.

Respect each and everyone at every stage of Life. Time & Karam are never in control of anyone.

What is Saadh Sangat? -> Group of Devotees of Guru Sahib (Saadh = Saints). When we join together at Gurdwara Sahib or Prayers - we become a part of Saadh Sangat. Guru Ram Das ji said: The virtues of the Sangat, the Holy Congregation, are so very great. (ਸੰਗਤਿ ਕਾ ਗੁਨੁ ਬਹੁਤੁ ਅਧਿਕਾਈ)

Therefore, we should always give time to go into Saadh Sangat - At Gurdwara or Prayers - the gathering there influences us to the Love of Guru Sahib - it is totally different from the gathering of friends / family.

Today October 17th is the Sangrand - 1st of the month of Katak - Sri Guru Arjan Dev ji has informed us, to join into Saadh Sangat: In Katak, in Saadh Sangat (the Company of the Holy), all anxiety vanishes. ||9|| ਕਤਿਕ ਹੋਵੈ ਸਾਧਸੰਗੁ ਬਿਨਸਹਿ ਸਭੇ ਸੋਚ ॥੯॥

Thai Sikh is at วัดซิกข์ลำปาง.

In today’s time, people are going into depression, taking tensions because their work situation, their health or mental is getting disturbed. So how can these issues be resolved? How can we get things going into positive direction? Answer: Have Faith in Guru Sahib and follow his given instructions ->

Sri Guru Arjan Dev ji has informed, those who chant Naam, their affairs get resolved.

Set a particular time to Chant Naam (Waheguru) everyday, for at least 15-20mins. 🙏🏻 One day we will realize and see the difference for what is written here. #Share

"Bache Bhagwan ka Roop Hote Hai" ~ Children are the form of the Lord. ~ The children has got the feature / behaviour / action of being an "INNOCENT" - their wonders are not describable. Things they do, sometimes happen like the Lord has done it. Bhagat Prahlad and Bhagat Dhruv met the Lord at their early age through the bhagti with their innocent behaviours.

Bhagat Dhanna ji has met the Lord by having the similar behavior as children - "being innocent". Sri Guru Arjan Dev ji said: ਧੰਨੈ ਸੇਵਿਆ ਬਾਲ ਬੁਧਿ ॥ Dhanna served the Lord, with the innocence of a child.

Bhai Gurdas ji has written in his Vaaran' - how the Lord blessed Bhagat Dhanna ji through his innocent behaviour and actions in bhagati of meeting the Lord.
ਗੋਸਾਈ ਪਰਤਖਿ ਹੋਇ ਰੋਟੀ ਖਾਇ ਛਾਹਿ ਮੁਹਿ ਲਾਵੈ।
(Seeing his true and loving devotion) God was forced to appear and eat his bread and buttermilk.
ਭੋਲਾ ਭਾਉ ਗੋਬਿੰਦੁ ਮਿਲਾਵੈ ॥੧੩॥
In fact, innocence like that of Dhanna makes the sight of the Lord available.

Let's lower down our ego and try to be an innocent person. Follow what is written in Gurbani and make our behaviour and actions better in order to pleased Guru Sahib and meet him.