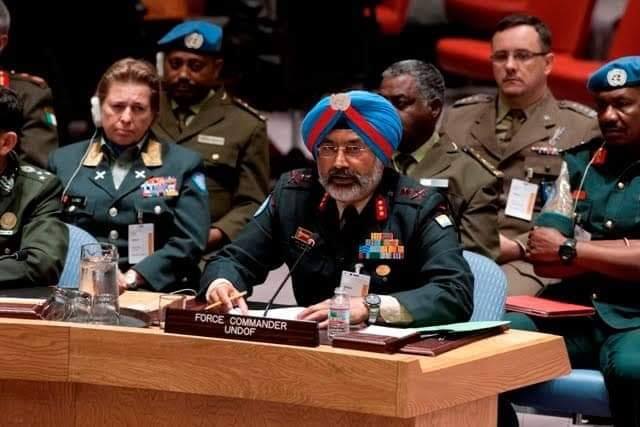 Major General Singha succeeds Major General Natalio C. Ecarma of the Philippines, who will complete his assignment on 13 August 2012. The Secretary-General is grateful to Major General Ecarma for his dedication and effective leadership of UNDOF over the past two-and-a-half years.

Bringing extensive command experience and knowledge of peacekeeping attained through national and international service, Major General Singha’s position prior to his new appointment was General Officer Commanding Infantry Division, a post he held since 2010. Between 2009 and 2010, he served as Brigadier General Staff Operations, and from 2007 to 2009, he was President of the Army Standing Establishment Committee. He was Colonel General Staff Sub-Conventional Operations at the Army Training Command from 2005 to 2006, and held the appointment of Colonel General Staff of an armoured division in the Indian Army. From 2003 to 2005, he served as Chief Logistics Officer with the United Nations Mission in Eritrea and Ethiopia.

Major General Singha holds master’s degrees in defence and strategic studies from Madras University, and in defence studies and management from Devi Ahilya Vidya Peeth, Indore, in India. He also graduated from the National Defence Academy at Pune, and the Army War College at Mhow, in India.

Lieutenant-General Iqbal Singh Singha officiated at his final regimental outing as chief guest of the Fiji contingent presenting them with UNDOF medals.
He is the United Nations Disengagement Observers Force (UNDOF) head of mission and force commander.
The medal presentation started with a parade by the Fijian troops at Camp Ziouani drill square.
The force commander was thrilled the marching of the Fiji soldiers to the beat of the 1FIR 10 – piece brass band led by Warrant Officer Class One (WO1) Waisea Waqabaca.
Lieutenant- General Singha said, “The medals that I have presented on behalf of the secretary general, Mr Ban Ki- moon, is in recognition of the hard work and dedication to duty by each individual, during your tour of duty with UNDOF.”
He also paid tribute to the Fijian peacekeepers passing through a very sensitive and crucial period when four other troop contributing countries left the mission area without relief.
He congratulated the Fijian battalion commanding officer Lieutenant -Colonel Isoa Loanakadavu for the impeccable turnout and outstanding drill displayed by his troops on parade.

#ThaiSikh Page requesting all Saadh Sangat ji, especially the young Sikh generations, to join together to #Follow and #Share knowledge about the Gurmat - GurSikhi to everyone. Let's follow the teachings given by Guru Nanak Dev ji - Guru Gobind Singh ji.

Vaisakhi's celebrations would be successful, if we truthfully understand about Vaisakhi and follow the teachings of Guru Sahib.
#HappyVaisakhi2021 to All Saadh Sangat ji 🙏 Please share and wish your friends and family Happy Vaisakhi 🎉🙏 ... See MoreSee Less

Raag is the name of Love - a way to Guru Sahib ... See MoreSee Less

Chayt is the first month in the Nanakshahi calendar, which governs the activities within Sikhism. This month coincides with March - April of the Western/Georgian/Julian Calendar and is 31 days long. The month starts on March 14 and ends on April 13.